EMCS is an autonomous system that collects energy consumption and generation data from Cornell properties in Ithaca, including dormitories, central power plants, and solar panels. Three major types of energy are recorded: chilled water flow, electricity, and steam flow. Every 15 minutes, the software architecture collects these energy consumption data from field meters and uploads them in a database. Such data is of interest to groups of different users, including researchers who study energy systems, building coordinators who want to promote sustainability goals, and students who want to learn more about sustainability and make an impact on campus.

The EMCS dashboard is the current bridge between the users and the data. The original EMCS dashboard contains valuable information for various user groups, including the Cornell community, scientists, and researchers. However, certain aspects of the visualization limit the accessibility of some data on the website, despite having the potential to promote sustainability goals and impact the community.

Based on previous conversations with the EMCS team and feedback from users, the student team meant to improve the dashboard in two areas: (1) better visualizations of energy data using Grafana and (2) better documentation that assists users of varying levels of knowledge about energy data. After several demonstrations with Steve Mandl, the primary coordinator of the website, they decided that the user document could blend into the website visualizations for accessibility. Such improvements (a) make the dashboard more accessible to users with different levels of knowledge, and (b) fulfill user needs under various use cases.

Throughout this semester, the student team has not only improved visualizations and added additional graphics, but also fixed legends of graphs and created guidelines for newcomers to navigate the website. Once the changes are deployed to the main website, it would greatly benefit all user groups and potentially attract more traffic within and outside the Cornell community. 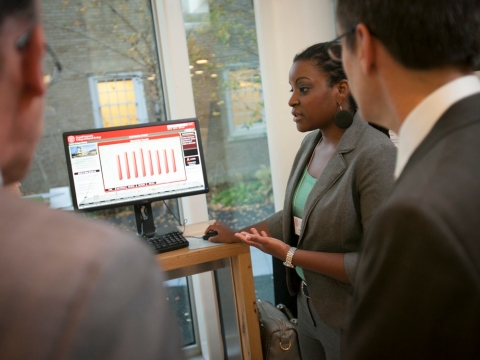