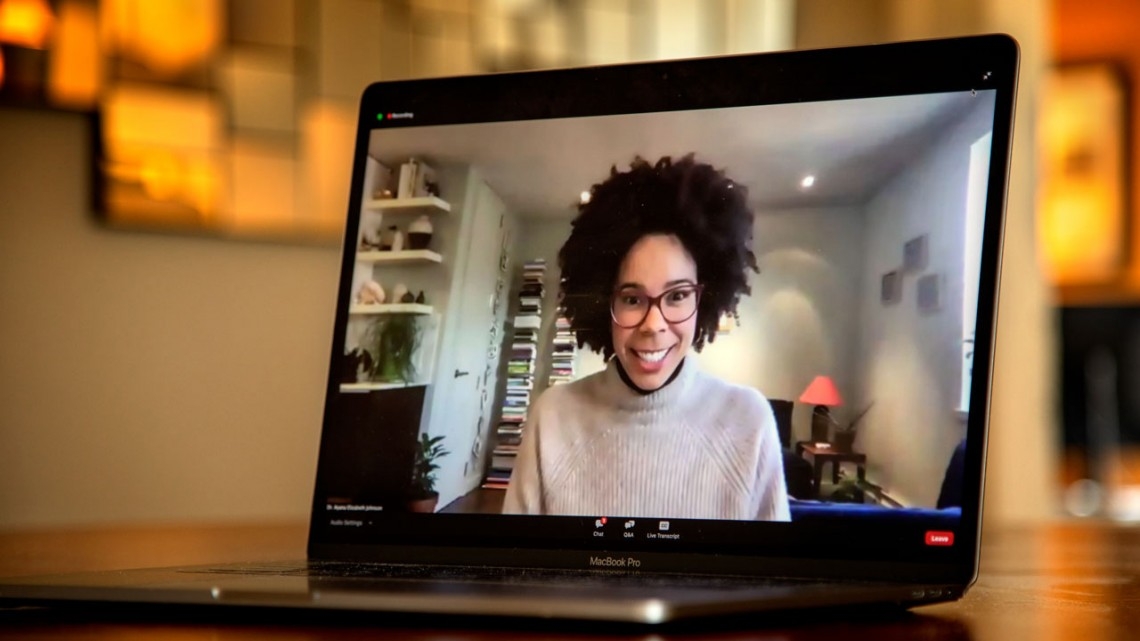 Speaking at the 2020 State of New York Sustainability Conference, Ayana Elizabeth Johnson, founder and CEO of Ocean Collectiv, framed the climate crisis as a leadership problem and spoke of a “Blue New Deal” to help the world’s oceans.

Through networking, exchanging ideas and offering solutions aimed at protecting the environment, the 2020 State of New York Sustainability Conference – held online Dec. 2-4 – shone a light on the connections between human health, social justice, feeding the world’s growing population and keeping the atmosphere cool.

One of the meeting’s early guest speakers was “Science Guy” Bill Nye ’77, who sought to address and inspire the students attending – from more than 70 colleges across New York state – to consider themselves future climate leaders.

“If you are going to be running the show … just keep in mind that what we want to provide (is) a high standard of living for everybody, because that is in everybody’s best interests,” Nye said. “And I think that will become clear. …That’s what this sustainability conference is all about.”

“If we can electrify all ground transportation,” he said, “we can eliminate an enormous amount of our fossil fuel consumption, which will lead to cleaner air for everybody. And that’s pretty reasonable.”

“When everybody has access to the internet, then you can have education for everybody in the world,” he said. “When we have that, we will not have this extraordinary anti-science movement … or this weird [anti-]climate change point-of-view. And when everybody shares this common vision of the future, a common vision of science and knowing our place in the cosmos, we will move forward very, very quickly.”

Following Nye was marine biologist Ayana Elizabeth Johnson, founder and CEO of Ocean Collective, and co-editor of the new essay anthology, “All We Can Save.” Johnson framed the climate crisis as a leadership problem.

“We clearly have not had the leaders that we need to get us to where we need to go,” Johnson said in a conversation with Shorna Allred, associate professor in the Department of Natural Resources and the Environment and in the Department of Global Development, in the College of Agriculture and Life Sciences (CALS). “Why not support a whole new wave of leaders?”

Johnson also spoke of the Green New Deal, in terms of another color: blue.

“If we don’t include the ocean … we’re just leaving out a lot of [climate] solutions that we need,” she said. “We need renewable offshore energy … We need regenerative farming that’s happening in the ocean … and which absorbs carbon.

“We need to overhaul shipping – one of the largest sources of [carbon dioxide] emissions,” Johnson said. “If shipping were a nation, it would be the fifth largest [carbon dioxide]-emitting nation globally. It has a really big impact.”

Raven Baxter – better known as Raven the Science Maven – spoke on the need to educate and communicate about science while keeping it fun. The microbiologist, rapper and budding science communicator is currently earning a doctoral degree at the University at Buffalo.

Two sustainability leaders among the Cornell faculty spoke. Natalie Mahowald, lead author of the 2018 United Nations’ Intergovernmental Panel on Climate Change (IPCC) Report and the Irving Porter Church Professor in Engineering, spoke about the IPCC 1.5 Report on how to reach climate targets.

“We here in the U.S., in New York state, are very lucky, we’re very wealthy,” said Mahowald, a faculty fellow at the Cornell Atkinson Center for Sustainability. “We got here [becoming wealthy] by burning a lot of fossil fuel and by cutting down forests [and] we emitted a lot of carbon dioxide.

“Of course, the rest of the world and developing countries all want our lifestyle,” she said. “So how in the world can they have our lifestyle, without it causing a lot of climate change? That’s the crux of the issue.”

Cornell Atkinson faculty director Daryl Nydam, DVM ’97, Ph.D. ’02, professor of population medicine and diagnostic science in the College of Veterinary Medicine, spoke on sustainability as it relates to “One Health,” which is how human, animal and environmental health are all connected.

Nydam spoke of food systems and how climate change has disrupted the world’s microbial environment.

“A lot of these diseases that are currently human specific, originated in animals,” Nydam said, explaining that humans get near animals with which we haven’t co-evolved. “When that happens, microbes are looking to make a jump to a new host. [Making food systems more sustainable] is an important way to mitigate future pandemic potential.”