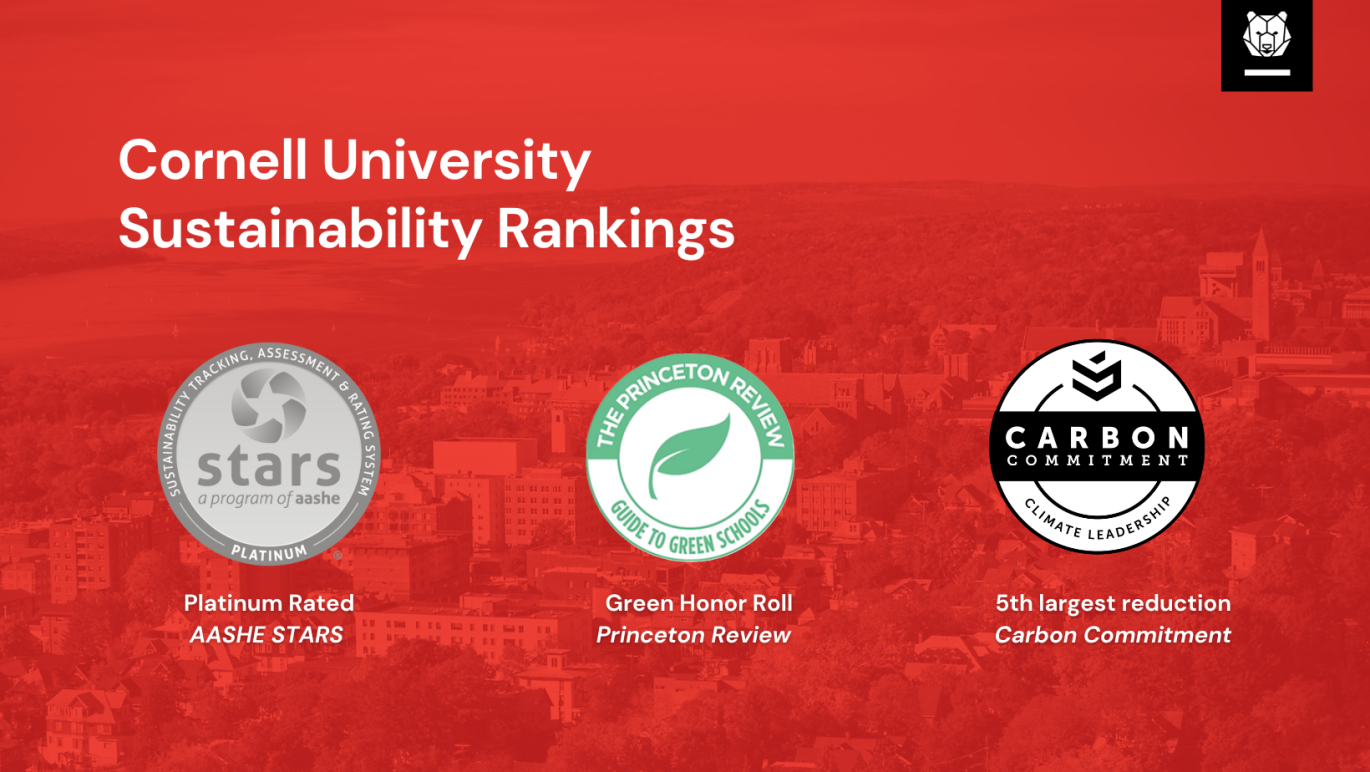 Cornell has yet again scored high in sustainability rankings from top evaluators in 2021. Every year,  universities across the country submit their sustainability achievements and progress to be stacked up against their counterparts. AASHE STARS, The Princeton Review, and The Sierra Club have all hosted rankings over the years in an effort to reward schools that make the extra step towards a sustainable future. Historically, Cornell has done well. This year proves that Cornell’s sweeping efforts have solidified our campus as a top sustainable university.

Cornell became the 6th university in the world to earn a platinum ranking from STARS in 2020. This year, Cornell is among seven other platinum-rated universities.  STARS is particularly useful for understanding where Cornell is a leader, and where there is room for improvement in operational, curriculum, research, and cultural systems related to our sustainability and climate impact.  The full report is free and open to the public to review. See the Cornell University 2021 STARS report to explore the full details. Note: AASHE STARS is released for data from the previous year. Therefore the most recent ranking listed here uses data gathered from 2020.

Cornell has earned its highest ranking yet from the Sierra Club, soaring from 12th to 4th “Coolest School” in 2021. Cornell rides high among other green universities such as Arizona State University, University of California Irvine, and Seattle University.

The Sierra Club has a unique system of ranking “Cool” Schools, with a little help from the public data available in AASHE STARS. In order to qualify into the Cool Schools ranking, a university must have earned a Bronze, Silver, Gold, or Platinum ranking from STARS, and opt into data sharing with the Sierra Club.

The data from STARS is then run through Sierra Club’s custom-built formula to weigh each reported category by the Sierra Club’s priorities.

Cornell has been ranked every year the Sierra Club has created a "Cool Schools" list.  2021 marks the highest ranking within the top-ranked schools that Cornell has achieved.

Every member of the Cornell community should feel honored to be recognized for our collective efforts to demonstrate sustainability and climate leadership.  These rankings indicate where we are succeeding as a campus, but also highlight areas where there is still work to be done and we strive to create a more sustainable campus, community, and culture.