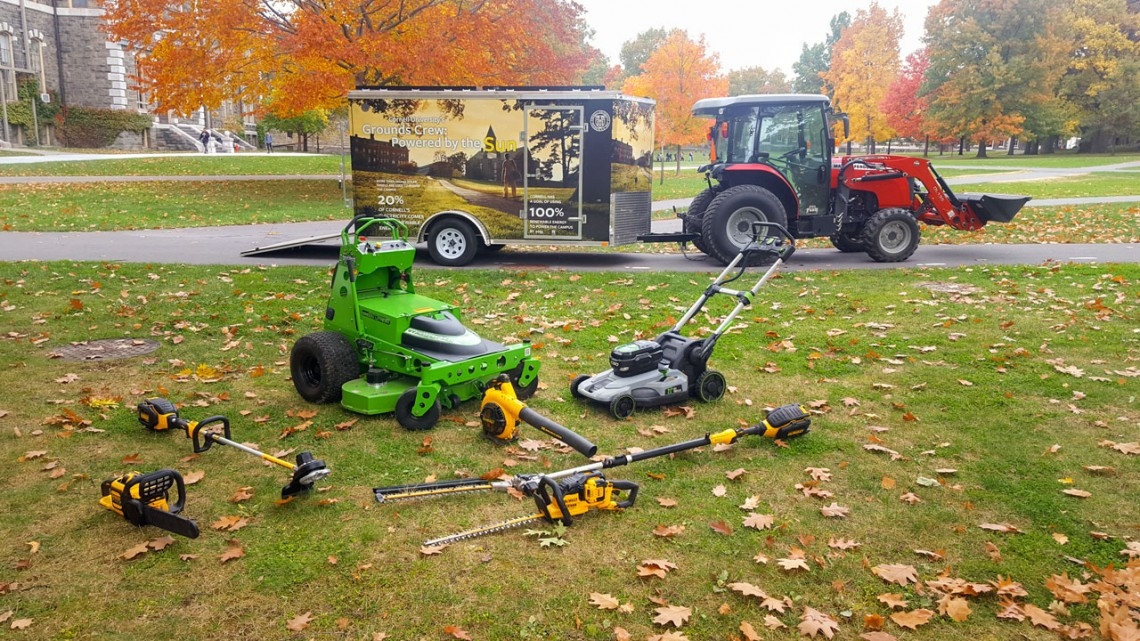 Around campus academic quads and residential areas, in the thick of autumn’s red and yellow leaves, soon there’ll be something green: a new tool-toting, solar power-generating trailer. Members of the Cornell University Sustainable Design (CUSD) student group have delivered to the Grounds Department a 7-by-12 foot trailer that will cart and energize electric string trimmers, hedge clippers, chainsaws and an electric heavy-duty commercial mower.

Said Adam Poluka ’19, the Solarize team’s first project director: “It’s a humble trailer with a lot of good engineering in it.”

Four solar panels on the trailer’s roof can generate 1,151 kilowatt hours of electricity over the course of a year – enough energy to power a 60-watt lightbulb for 19,187 hours or 2.2 years, said Dan Pyrek ’20, the team’s second project director.

As a groundskeeping professional, Schied had seen similar tool trailers and approached the CUSD group to see if they would build a solar trailer sturdy enough to withstand rigorous campus requirements.

In 2017, inspired by Cornell’s “living laboratory” concept, CUSD students formed a team, meeting with Schied and his crew to determine specifications. Over four semesters, the team conducted research, secured grants and created an interior design to fit the Grounds Department’s needs.

“The trailer’s system was designed to achieve enough solar power generation to run for hours,” Poluka said, “as well as provide ample electricity storage in the likely event there is a string of cloudy days.”

Team members liked the trailer so much, they decided to market it. In summer 2019, members of Solarize participated in the local Life Changing Labs startup incubator, which works closely with Entrepreneurship at Cornell. Pyrek and Tameem Jahan ’20, the Solarize team’s third director, spent eight weeks learning about marketing and brand management to bring the trailer’s concept to the marketplace.

“Transportation is a large contributor to humanity’s carbon footprint,” said Jahan. “We are a team of engineers and other professions who are passionate about sustainability and we want to develop this untapped market of mobile solar. We believe that solar is a good solution.”