CU moves beyond coal with opening of new power plant

When you've taken a small but significant step to save the planet, it's appropriate to celebrate. So although Cornell's new, super-efficient Combined Heat and Power Plant has been up and running since mid-December, the university held a grand opening event Jan. 15 to show off the facility to the media and representatives of state and local government.

"We are cutting our carbon emissions by 28 percent. That is a major accomplishment," announced Kyu-Jung Whang, vice president for facilities services, at a gathering in the Duffield Hall Atrium.

The impact of the project goes beyond just reducing Cornell's carbon footprint, said President David Skorton. "Through example and the bully pulpit, we will educate the state, the nation and the world," he said.

That sentiment was echoed by guest speaker Bruce Nilles, director of the Sierra Club's "Beyond Coal" campaign. The club has approached educational institutions to urge them to stop burning coal, and many say they just can't do it, Nilles reported. "We're going to be holding up Cornell as a showcase," he said.

The new plant is only a small step in meeting the university's goal of zero net greenhouse gas emissions by 2050, Skorton pointed out. In February 2009, Skorton became one of the first university presidents to sign the American College and University Presidents Climate Commitment to meet that goal.

"When I signed the President's Commitment," he said, "I did not know how we would get to climate neutrality, but I did have faith in our collective ability as a university to educate and discover our way through, and today is an example of finding a piece of the larger puzzle. Although we are celebrating today, we have a long hill yet to climb."

Waste heat from the turbines then makes steam that runs another generator, and the steam, now reduced in temperature and pressure, is finally piped throughout the campus for heating. The exhaust going up the smokestacks is scrubbed to remove carbon monoxide and nitrogen oxides. So little energy is wasted that solar collectors had to be installed to provide heat and hot water for the new offices and locker rooms attached to the facility, because not enough waste heat could be scavenged from the generators. The output will be up to 30,000 kilowatts of electricity, or about 70 percent of campus usage. The campus also draws power from the small hydroelectric plant on Beebe Lake, and some power is purchased from the grid. 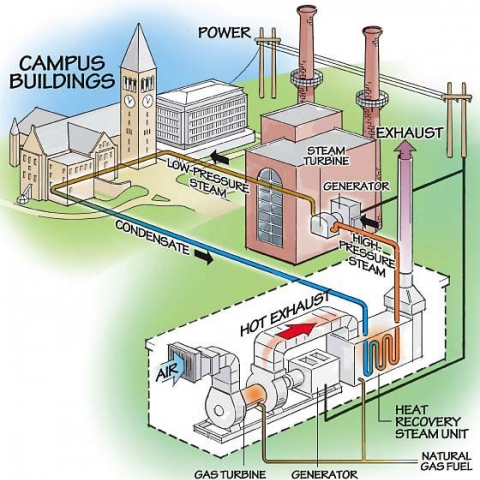 In Cornell's new combined heat and power plant, turbines fired by natural gas will generate electricity, then waste heat from the turbines will make steam to produce even more. Exhaust from the steam turbines is still hot enough to circulate through underground tunnels and warm radiators all over the campus.

The new turbines could run on gas or liquid biofuels that may become available in the future, and the coal-fired generators might be converted to run on wood, technicians at the plant said.

The system does not depend on local sources of natural gas, Whang noted. Serendipitously, an interstate natural gas pipeline is located about three miles from campus, and Cornell has installed and owns a spur from that line.

The system is expected to reduce the university's carbon dioxide emissions by about 75,000 tons per year. Consumption of coal in the plant will be reduced by 50 percent over the first year, and completely the second. The main reason coal consumption continues at all, a technician at the plant said, is to use up the coal the plant already has stockpiled. Also, the coal-fired generators serve as a backup during the early shakedown period for the new turbines. Discontinuing coal also will save 100,000 gallons a year of diesel fuel used by trucks that deliver the coal to Cornell from West Virginia coal fields.

Both Whang and Skorton thanked the New York State Energy Research and Development Authority, which provided $1 million in funding for the new plant, as well as support for the development of the university's Climate Action Plan, and the New York State Department of Environmental Conservation for expediting paperwork. Local government also supported the project through bond funding. The total cost has been estimated at about $80 million.