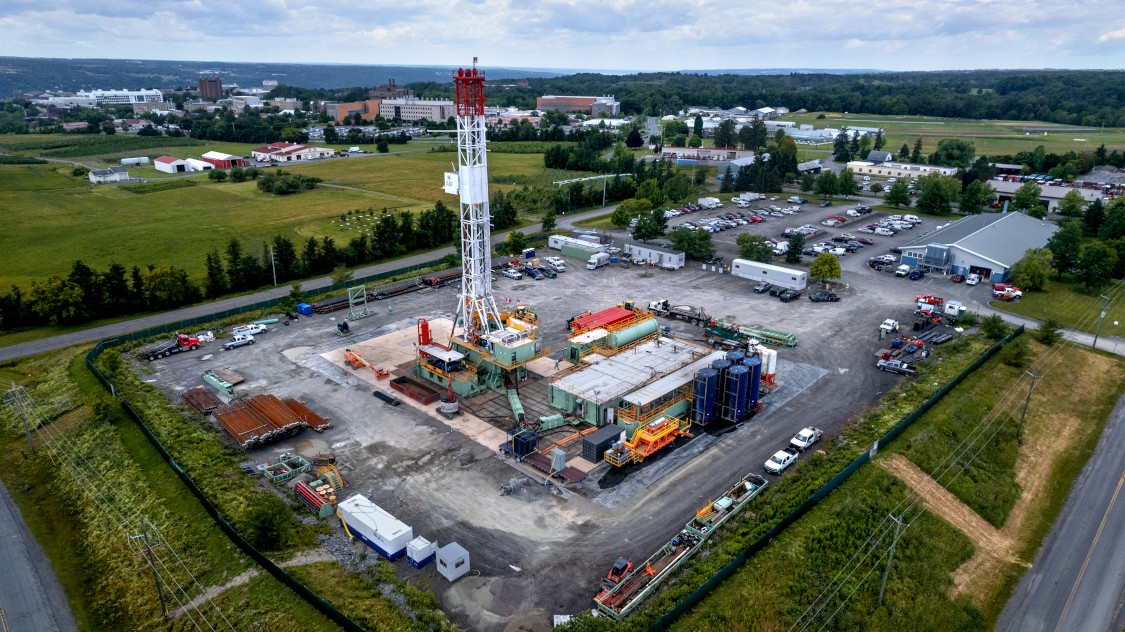 Cornell’s exploration into the feasibility of using deep geothermal energy to heat the Ithaca campus has reached a major milestone, with the completion of drilling for the Cornell University Borehole Observatory (CUBO).

CUBO provides a platform to directly study the temperature, permeability and other characteristics of the rock deep beneath the Ithaca campus – factors that will help the university determine whether to move forward with a proposed plan to warm the Ithaca campus with Earth Source Heat (ESH). In addition to providing critical ESH-related information, the observatory is designed to persist as a permanent resource for showcasing and enabling deep earth exploration and experimentation

An ESH system would extract naturally heated water from underground, transfer its heat to a separate supply of water flowing within the campus’ heating distribution pipeline, and return the original water to the subsurface, where it warms back up and begins the cycle again.

The drilling of CUBO – overseen by Facilities and Campus Services in collaboration with university faculty, staff from the National Renewable Energy Laboratory and experienced geothermal consultants – reached a depth of 9,790 feet below the subsurface, reaching into the crystalline basement rock. The CUBO team conducted a comprehensive testing program, involving the collection of rock cuttings and cores and the use of geophysical instruments to measure rock properties, describe the temperature and stress conditions underground, and identify natural fractures that may permit water flow and heat exchange. In addition, by changing the water level in the well, they were able to evaluate the subsurface permeability.

The initial data appears to confirm the prior expectations of researchers for the quality of the geothermal resource at a range of depths between 7,500 and 10,000 feet: a combination of rock temperatures between 75 and 100 degrees Celsius and little permeability except that controlled by ancient fractures in the rock. Those conditions imply that an Enhanced Geothermal System – technology that is a current research focus of the U.S. Department of Energy – will be needed for geothermal heat to be used for campus heating.

“The CUBO project was an extremely big undertaking – whether measured by time, personnel or money – which taught all of the Cornell participants valuable and often unexpected lessons from the first day to the last day,” said project co-PI Terry Jordan, the J. Preston Levis Professor of Engineering Emerita. “We are pleased that our geological predictions were substantially accurate – that was useful – but more importantly we are delighted that the new data provide numerous perspectives on the system of solid rock, fractures, pressures and fluids deep below campus. We can replace the ‘assumptions’ we were forced to use before with actual knowledge. And because of the collaborative nature of CUBO, if additional wells are drilled for an Earth Source Heat demonstration, Cornell will be vastly better able to efficiently partner with the industry drilling experts.”

The greater Ithaca community will have a chance to learn more about the future of ESH at Cornell when the university hosts its fifth ESH town hall meeting, Nov. 3 in 101 Phillips Hall from 5:30 to 6:30 p.m. The event will also be livestreamed and recorded.

Because CUBO provides only scientific information and will not be used for heat production, data is now being analyzed to determine if the university could move forward with drilling a separate pair of wells as a demonstration for ESH.

In addition to heating the campus without the use of fossil fuels, ESH would enable the university to meet its goal of carbon neutrality for the Ithaca campus by 2035, while providing a blueprint for other geothermal energy applications throughout the northeast and other parts of the U.S.

The project, which was launched with a $7.7 million grant from the U.S. Department of Energy, has already generated significant interest in the scientific community. In August, several members of the CUBO team and their collaborators presented their research at the Geothermal Rising Conference in Reno, Nevada.

One presentation, “Investigating Performance of Geothermal Reservoirs With Bi-Directional Heat Transfer for Seasonal Thermal Storage Using Thermal-Hydraulic Reservoir Simulations,” explored, with numerical simulations, the possibility of using a deep geothermal reservoir at Cornell to store waste heat produced by campus activities during the summer months, to drive ESH in the winter. The modeling demonstrated how waste heat could be used to achieve a thermal battery storage system, increasing the efficiency and longevity of a geothermal heating system.

Another presentation, “Innovative Thermal Strategies: Electrification’s Best Friend,” showed the financial benefits of using ESH compared with other thermal electrification strategies that have been proposed for helping New York state reach its goal for a 100% decarbonized grid. The paper reported that, beyond meeting Cornell’s needs, ESH could reduce by about $300 million the renewable electricity and battery storage capital costs to “green the grid,” compared to conventional air-source heat pump technologies.

“For the CUBO project participants – students, facilities staff, and faculty – the ‘summer of CUBO’ was intense, stressful, fun and very worthwhile,” Jordan said. “It took the interdisciplinary expertise of this team and the dedicated interest of external industry experts to realize this vision. And it will continue to require that partnership to design and construct a successful ESH demonstration project.”