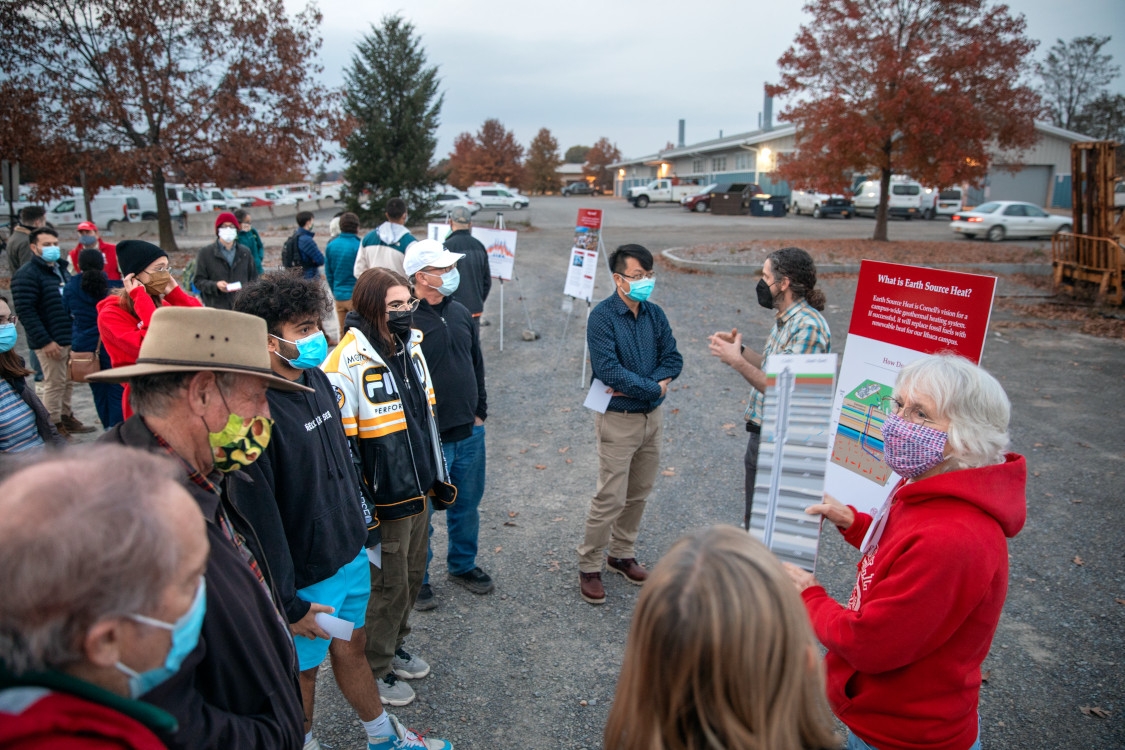 An unremarkable gravel parking lot just off campus will soon house one of Cornell’s most important living laboratories. Welcome to the Cornell University Borehole Observatory – known as CUBO. By summer 2022, the university plans to drill a 10,000-foot hole to verify whether conditions underground will allow clean, reliable and renewable Earth Source Heat – Cornell's name for direct heating with geothermal liquids – to warm the entire Cornell campus during the winter and help reduce the university’s carbon footprint to zero. The first important step is drilling this exploration well to confirm the technical viability and ensure the safe operation of the system. About 80 students, faculty, staff and Tompkins County neighbors learned all about Earth Source Heat and how it would work at an open house hosted by the university on Nov. 9 in that parking lot.

“Cornell has been advancing research, monitoring and modeling for years,” said Sarah Carson Zemanick, director of the Campus Sustainability Office. “This open house, and the interactions with those Cornellians involved, helped bring Earth Source Heat out of our labs and into a tangible and exciting reality for the community.”

The test borehole aims to understand Earth Source Heat’s viability and safety prospects. At the surface, the diameter of the hole will be about the size of a hula hoop. The sides of the hole will be encased in cement and steel, and will narrow as it deepens. When the hole reaches 10,000 feet – about two miles below the surface – its diameter will be about 8 inches, the size of a small frying pan. For perspective, the hole’s depth equals more than 7 Empire State Buildings.

At the open house, students and other community members crowded to hear answers at all five round-robin stations.

Linda and Buzz Lavine, from Dryden, New York, peppered Cornell geologist Ole Gustafson, Ph.D. ‘20, of Facilities and Campus Services, with questions about the physical borehole. Linda Lavine asked, “How long will it take to drill the hole?”

Engineers expect it takes about two months to drill a well down to 10,000 feet, where the Earth’s temperature approaches nearly 200 degrees Fahrenheit – close to water’s boiling point, Gustafson replied. He said that the CUBO well drilling operation will take a bit longer, since he, along with engineering and geology professors, will want to extract a lot of data during the test’s drilling stages.

If this initial borehole test confirms the right subsurface conditions, Cornell may propose a demonstration: Two new wells would be drilled so that hot subsurface water can be extracted from one well and returned down a second well for reheating by the Earth.

At the surface, heat exchangers would transfer the warmth of the hot fluid from the subsurface to another loop of water to circulate around campus and warm the buildings.

Local environmental scientist Noah Mark, of the nonprofit Community Science Institute, attended the open house to learn more about the Earth Source Heat process and discuss the quality of the recirculating water.

With a long poster showing the borehole layers in hand, Terry Jordan and Patrick Fulton, professors of Earth and Atmospheric Sciences (College of Engineering) explained the strata to attendees. Anthony Ingraffea, the Dwight C. Baum Professor of Engineering Emeritus, never paused talking to the large crowd at his station. Also answering questions were Jeff Tester, professor of sustainable energy systems in the Smith School of Chemical and Biomolecular Engineering, and Steve Beyers, the lead Earth Source Heat engineer with Facilities and Campus Services.

Jacob Feit ’22, who studies environmental policy and governance in the College of Agriculture and Life Sciences (CALS) and is the executive vice-chair of the Cornell Student Assembly, said testing the borehole concept was a good idea. “As students, we want to see Cornell commit to being as sustainable as technologically possible,” he said. “This initiative accomplishes that while additionally establishing energy independence.”

Sangwan, a biology and society major (CALS), recognized carbon’s impact on campus, but was not conversant on the Earth Source Heat idea. After attending the open house, he said, “This is a revolutionary concept.”

Bucci, an environmental and sustainability major (CALS) said of combining Earth Source Heat and Lake Source Cooling: “There are really no environmental drawbacks and the environmental risks are low,” she said. “Cornell is the only university in the Northeast doing this.”

Carson Zemanick said she was delighted with the crowd’s genuine curiosity and well-informed questions. “For Cornell to become more sustainable, I think there is a growing understanding that sustainability isn’t a one-size-fits-all strategy,” she said. “We’re showing how important it is to develop and deploy game-changing solutions in a global context.”