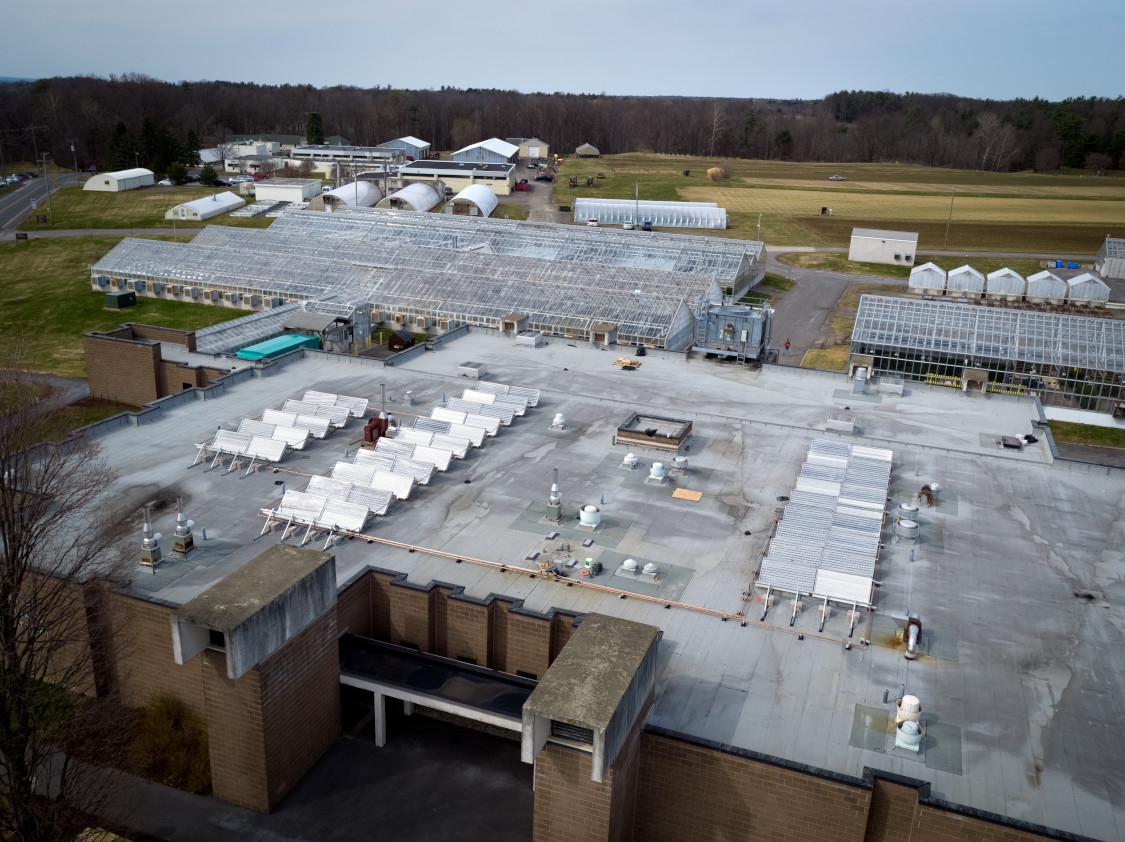 For proof that the pandemic has not stopped campus sustainability efforts, look no further than the rooftop of Guterman Research Center.

The center on Caldwell Road – which houses research and teaching labs, growth chambers, controlled atmosphere storage rooms and greenhouse facilities – has installed 50 new solar collector panels. The system uses an innovative mirror technology, as opposed to conventional photovoltaic cells, to capture sunlight and turn it into thermal energy that will help heat the facility’s water distribution network and reduce its reliance on campus steam.

It’s one of several sustainability projects, from reusable dining serviceware to living laboratory experiments, that are continuing apace despite the many interruptions made by COVID-19 to campus life.

The intelligent mirror array is the first of its kind at Cornell and the seventh on-campus solar system, with construction of an eighth project set to commence on North Campus in June. The Guterman Research Center now joins the Nevin Welcome Center at Cornell Botanic Gardens and the Combined Heat and Power Plant as the only sites of solar thermal systems on the Ithaca campus.

The Guterman facility was an ideal choice because it has a constant, year-round demand for heating, according to Matt Kozlowski, civil and environmental engineering manager in Facilities Engineering.

“That’s not necessarily typical of the rest of campus,” Kozlowski said. “So it was a good match.”

The system is expected to annually reduce the facility’s campus steam consumption by 122 million Btus and offset approximately 4% of the facility’s summer heat load. It was designed, installed and will be maintained by Skyven Technologies, grand prize winner of the 76 West clean-energy technology competition in 2017, with the support of a New York State Energy Research and Development Authority (NYSERDA) Ignition Grant.

“This is directly offsetting fossil fuel use, with the potential, in the future, that this ties into a district energy system fueled by Earth Source Heat or some other kind of renewable technology,” Kozlowski said. “There are all these different interesting sources. This is another piece of that puzzle.”

Planning for the system, which is set to go online in early April, began well before the pandemic. The installation process was slow but steady, with a small team of one to four people, usually an engineer installer and occasionally a handful of roofers, working through the winter.

“It was something that kept us steadily moving forward, even during a time when many projects were put on hold and everyone was navigating challenges of a new pandemic,” said Rhoda Maurer, manager of the Cornell Agricultural Experiment Station Plant Growth Facilities. “This is essentially moving us in a direction where we can look at, and contribute towards, the development of new technologies that are going to help Cornell with its long-term carbon neutrality goals, but also help the larger world.”

The system is the first in a series of long-planned sustainability projects at the Guterman center that include modernizing its greenhouses and growth chambers.

An additional benefit of the intelligent mirror array is its potential to function as a living laboratory for student and faculty sustainability research, Kozlowski said.

It certainly has plenty of company. A number of living lab projects with a sustainability focus are in progress this semester.

For the capstone senior seminar in Environment and Sustainability course, student teams are evaluating 20 years of data related to the university’s Lake Source Cooling, with an emphasis on analyzing its energy and greenhouse-gas savings, economic return on investment, lake impacts and outreach to the Ithaca community.

Another project, led by Fengqi You, the Roxanne E. and Michael J. Zak Professor in Energy Systems Engineering, is using systems-level modeling and optimization to inform decisions on campus energy systems for carbon neutrality. You’s research team is particularly interested in assessing the challenges that arise from the fluctuations of energy demand, both by season and the daily cycle of electricity consumption, with Lake Source Cooling and Earth Source Heat.

“Systems level optimization is important to ensure we select the best energy technologies and systems that would be cost-effective, energy efficient and environmentally sustainable, as our campus transitions to carbon free,” You said. “Rigorous quantitative analysis based on systems optimization would also help to address the short-term fluctuation, seasonality and resilience issues.”

Other recent sustainability initiatives don’t rely on data and modeling, but rather cutlery and working groups.

Cornell Dining launched a new partnership to reduce the price of reusable utensil and takeout container sets with the goal of preventing more than 900 disposable containers from ending up in the landfill each day.

Cornell Dining launched a new partnership on March 1 with the Campus Sustainability Office and Cornell Grounds to provide members of the campus community a discount on reusable utensil and takeout container sets. The sets, which normally cost $12, are available for $5. The effort seeks prevent more than 900 disposable containers from ending up in the landfill each day.

And the Sustainable Cornell Council is overseeing a variety of committee efforts, from optimizing purchasing inventory to encouraging student sustainability literacy.

While the pandemic has taken a toll that has yet to be fully calculated, one positive development has emerged. The drop in commuting and business travel, as well as reduced operations, helped put a dent in the university’s campus carbon footprint, which dropped 20% from 2019 to 2020, and 49% from the 2008 baseline, according to a new report.