Our Legacy of Sustainability and Climate Leadership

Cornell University's legacy of sustainability extends deep into our campus history, beginning with the principles upon which the University was founded in 1865.

From its inception, Cornell University has been a pioneer in reinventing education with a purpose. Visionary leaders Ezra Cornell and Andrew Dickson White rejected the social limitations of existing educational system of the 1800s, which typically accepted only white men of Christian denominations, and instead committed to advancing equitable educational access  by creating an institution in which "any person can find instruction in any study.”  This early commitment to social sustainability through access and equity was followed in later years by progress and leadership in other areas of sustainability, notably climate leadership and environmental care.

Explore our history with the interactive timeline below.

Learn more about our existing plans and ongoing commitments for the University here.

Explore the timeline by clicking on elements, or use the forward and back buttons to move through the entire timeline.  Use the arrows at the bottom of the presentation to navigate.  You can also use your left and right keyboard arrows. If you'd like to skip around between topics, simply click on the topic or subtopic. You can enter or exit full screen by clicking the icon in the lower right corner of the window. Use your mouse’s scroll wheel or the scroll movement on your touchpad to zoom in and out.   Learn more about exploring a Prezi Presentation.

New York Governor Reuben Fenton signs into law Cornell University’s charter on April 27, 1865. From its inception, Cornell has pioneered social sustainability for every person in the Cornell community and beyond. The University Charter states, “Persons of every religious denomination or of no religious denomination, shall be equally eligible to all offices and appointments.” Although Cornell’s nonsectarian and inclusive stance caused controversy in the mid to late 1800s, Ezra Cornell believed these ideals could only succeed as tenants for a university and for “true lovers of liberty” (letter by Ezra Cornell).

Co-founders Ezra Cornell and Andrew Dickson White welcomed 412 students to Ithaca, New York. These students comprised the largest entering class admitted to any American college at the time. Due to the Morrill Land Grant Act, which passed in 1862, public lands in New York could be used to aid education in agriculture and the mechanic arts. Since its founding as a land-grant university, Cornell has sustained a rich history of partnering with New York State to benefit our broader society. Cornell Trustee Henry W. Sage writes to President White, advocating “for the education of women under the wing of Cornell.” The Trustees officially vote to accept women the following Spring of 1872. Both White and Cornell considered it essential to create a university open to all individuals, regardless of nationality, race, gender, or socioeconomic class. Both Cornell and White considered it essential to integrate agriculture and engineering with a broad liberal education, a groundbreaking approach for their times.

Cornell implements a program called the Energy Conservation Initiative (ECI), which has kept campus energy use relatively flat since 2000, despite a 20% growth in campus building square footage.

President Rawlings, Cornell officials, and student leaders sign a commitment to uphold sound environmental leadership. The new statement pledges support and participation from all levels of Cornell in protecting the environment and building sustainable futures for all. Participant Theodore L. Hullar, acting director of Cornell’s Center for the Environment, notes, “Especially important is the emphasis on sustainable futures, which aims to bring together optimally long-term environmental quality combined with economic and social vitality, for the continued fulfillment and enrichment of individual spirit and initiative.”

Lake Source Cooling is pioneered by Cornell engineers. Replacing the need for refrigerants, this innovative renewable energy represents about an 86% reduction in energy use for campus cooling.

Student activists lead a 7-day protest in front of Day Hall opposing the United States’ decision to refuse to sign the Kyoto Protocol. This protest leads to Cornell signing the Kyoto Protocol, becoming the first university in the nation to independently commit to this international agreement.

The University had this patch of urban wildland, located near the intersection of University Avenue and Lake Street, leveled to make way for a 176-space parking lot as part of its West Campus Residential Initiative. The administration’s decision to pave over Redbud Woods was the cause of many well-publicized protests over a several year period by environmental activists including students and faculty. It also was the center of two legal battles between Cornell and the City of Ithaca. Despite the Court’s finding that Cornell could use the land, local community activism about the now demolished Redbud Woods has continued to persist.1

2007: The Atkinson Center for a Sustainable Future

The Atkinson Center for a Sustainable Future is established as the first research center in America that unites the three pillars of sustainability (environment, social, and economic) within one center at Cornell.

The Cornell community develops and implements our award-winning Climate Action Plan, committing to reach carbon neutrality by 2050. The President’s Sustainable Campus Committee (PSCC) forms to advocate for initiatives that enhance Cornell’s living laboratory for the environmental, economic, social, and academic dimensions of sustainability.

The CSO is created to empower, equip, and engage the Cornell community to catalyze a sustainable campus transformation.

Cornell first participates in Recyclemania, the national competition between colleges and universities to promote and improve efforts to reduce campus waste.

Cornell stops using coal for energy and begins operating a natural gas-fired combined heat and power plant to reduce emissions by 64,000 tons per year. Cornell’s Combined Heat and Power Plant increases the efficiency of heating and electrifying the campus from 50% to 75%.

The Association for the Advancement of Sustainability in Higher Education (AASHE) gives ratings in the program called STARS, or sustainability tracking, assessment and rating system.

Available to every student across every study, this minor enables and empowers students to explore the many facets of rapid climate change while obtaining a firm knowledge in basic physical, ecological and social science (as well as interactions with history, philosophy, and the arts) disciplines.

In order to integrate sustainability into the workplace at Cornell, the Division of Human Resources revises the university-wide guidance document for employee expectations, Skills for Success, to include sustainability as an overarching principle.

The new website Building Dashboard provides raw, real-time energy data on campus buildings to educate the Cornell community about campus energy use, and empower people to integrate sustainability into their personal behaviors.

All University assemblies pass resolutions calling for Cornell to speed the carbon neutrality goal to 2035.

Cornell’s new budget model makes each college and unit on campus responsible for its own utility bill. Campus-wide energy direct billing provides a compelling incentive to reduce energy use.

Over one hundred students representing more than 40 environmental clubs, all seven undergraduate units, and a diverse array of majors, establish a new, cohesive environmental alliance at Cornell called ECO (the Environmental Collaborative).

The Snyder Road Solar Farm goes live, producing 2.5 million kWh per year (about 1% of our total electricity use, or enough to power about 240 homes for one year). As the first large-scale project in the region – Cornell worked through several utility and state policy barriers paving the way for many others. The Snyder Road Solar Farm includes educational panels installed on a “tilt” racking system which allows for adjustment to facilitate research studies. In lieu of running gas-powered, carbon-dumping mowers to maneuver around 6,778 solar panels, the Snyder Road Solar Farm uses a flock of about 40 sheep to mow the fields.

Cornell now uses the building automation (controls) to do lighting control instead of the industry standard of a separate, more expensive and harder to maintain proprietary lighting control system. A true paradigm change, this shift has won Cornell and our automated logic controls dealer Logical Control Solutions Project Of The Year international award for the recent redesign of Klarman Hall.

Cornell releases the report “Options for Achieving a Carbon Neutral Campus by 2035.” This report is first to recommend our current quadruple bottom line sustainability framework, an innovative form of analysis that evaluates projects affecting four categories: academic purpose, prosperity, people, and the planet.  The report confirms Cornell’s goal of pursuing Earth Source Heat and renewable energy to heat and power the campus with carbon neutral sources.

Cornell earns STARS Gold rating for the 6th year in a row. Cornell is the top-rated Ivy league for sustainability through the STARS and other national rankings.

A new environment and sustainability major in the College of Arts and Sciences and the College of Agriculture and Life Sciences (CALS) is created and launched, following an extensive process of interdisciplinary community engagement.

On May 24, 2018, the largest pyrolysis kiln of its kind at any American University opens. The kiln creates earth-friendly biochar which boosts the fertility of soil and will be used operationally and for research advancements.

The College of Veterinary Medicine solved a challenging cow waste reduction issue and is successful in capturing liquid waste for energy production through the Ithaca Wastewater Treatment Facility.

The Residential Compost Program launched in Fall 2018 with 45 trained Compost Managers (student volunteers), who composted over 10,000 lbs of food scraps and napkins during the year from 23 residential buildings on campus.

The Sustainable Cornell Council is created to direct and coordinate Cornell's role in sustainability.  The SCC represents the third iteration of sustainability governance and is driven by senior leadership and staff, faculty, and student representatives.

For the 8th year in a row, Cornell received an AASHE STARS Gold Rating. STARS innovation credits are a testament to our community’s innovation and commitment to sustainability solutions that scale beyond our campus.

For the first time in FY2019, every college at Cornell University includes sustainability learning outcomes as part of the core curriculum for students.  That means every student - regardless of area of study or major - graduates from Cornell ready to create a better tomorrow.  Whether students study in English, Industrial Labor Relations, International Business, Plant Sciences, or Engineering, classes you will take prepare them for our greatest sustainability and climate-change-related challenges.

Between 2008 and 2019, the Cornell campus maintained a 36% reduction in greenhouse gas emissions from the 2008 baseline. Cornell's Ithaca campus has successfully reduced (and maintained a reduction) in greenhouse gas emissions which lead to climate change by 1/3. In the Fall of 2019, renewable energy provided 0% of our heating, 98% of cooling, and 10% of electricity needs. Projects that were implemented in the Fall of 2019 saved $1.2 million in energy costs, with $25 million cumulatively saved since 2008.

The new Cascadilla Community Solar Farm comes online, doubling the clean and renewable electricity being used by the University and bringing the overall number to 20 percent. The new solar farm is cared for by sheep who mow the grass, cutting down on fossil fuels in landscaping.

The Cornell University Board of Trustees votes to institute an immediate moratorium on new private investments focused on fossil fuels, and to grow investments in alternative energy technologies. The moratorium evaluated the financial outlook for coal, oil, and gas and threats posed by climate change.

From December 2nd–4th, Cornell hosts the 10th annual State of NY Sustainability Conference as part of membership with the New York Coalition for Sustainability in Higher Education (NYCSHE). The NYCSHE annual conference brings together faculty, staff, and students from New York’s colleges and universities to share best practices and expertise to benefit policies, practices, and sustainable development.

In a historic national achievement, Cornell becomes the 1st Ivy League and the 6th institution in the world to achieve a STARS Platinum Rating from the Association for the Advancement of Sustainability in Higher Education.

END_OF_DOCUMENT_TOKEN_TO_BE_REPLACED 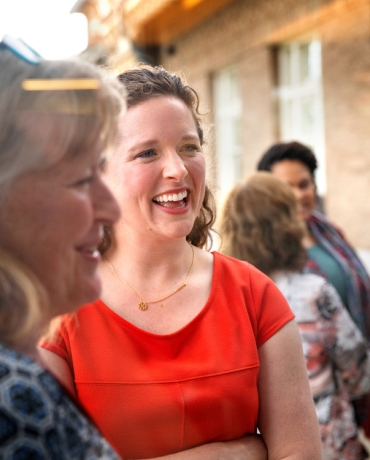 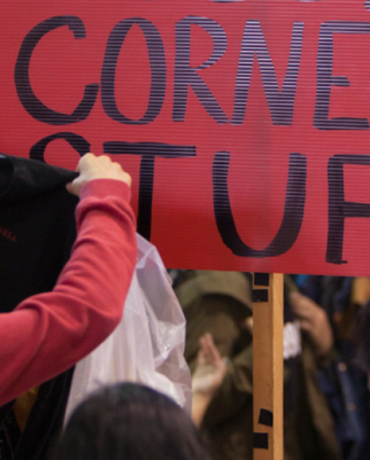 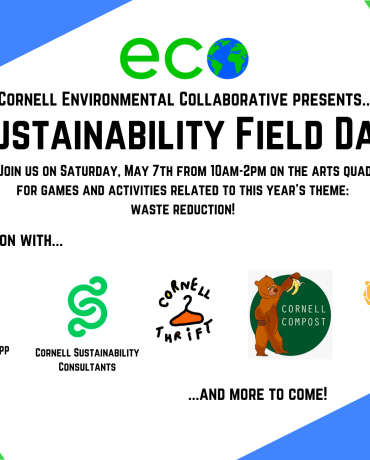 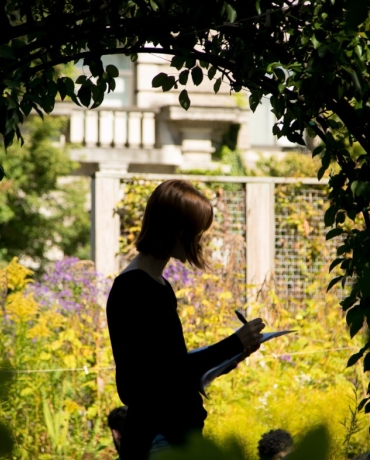 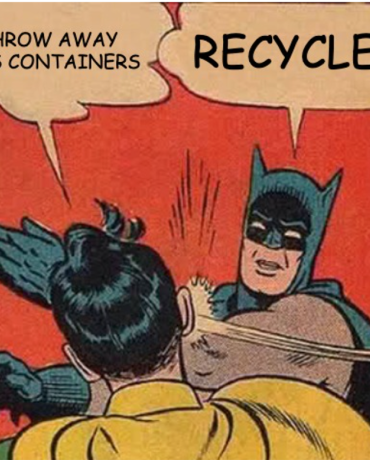 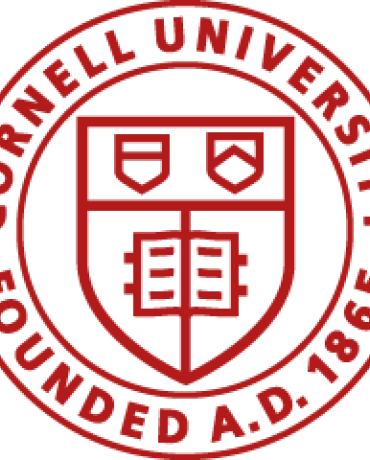 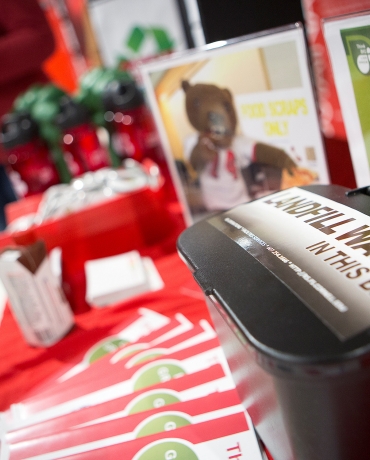 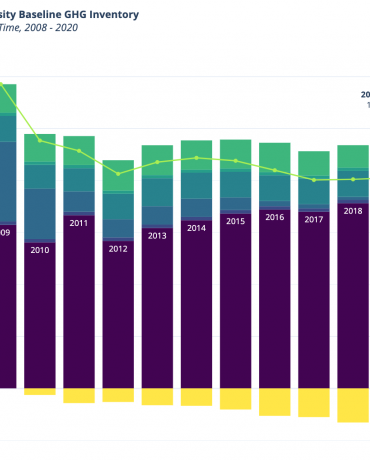